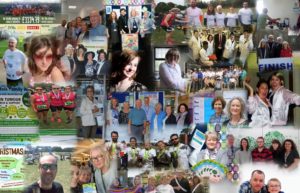 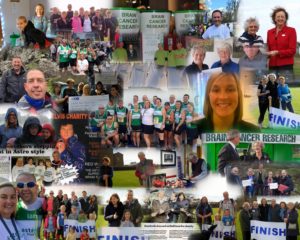 Trustees Robbie & Mary, together with supporters Val, Kenny and Jackie, did a bucket collection at Lidl, Heacham, Norfolk, resulting in a great total of £355.36 for Astro Brain Tumour Fund.

Trustees Mary and Robbie, with the help of Ros, David, Val, Michael, Pam, Teresa and Trevor, held a Christmas Party in Holme-next-the-Sea Village Hall on Saturday, . Four different soups were served together with a selection of desserts followed by chocolates and coffee. There was a raffle, tombola, competition to win a hamper, a guessing game, as well as a fun Christmas quiz.  Members of Hunstanton Community Choir attended and sang Christmas songs and carols beautifully which added to the festive atmosphere. A good time was had by all and a total of

We have received the brilliant sum of £250 from the members of the bowls club which was the result of the contents of a Christmas collection pot.

A total of £534 has been raised by Robbie Burton in 2018 as a result of sales of fruit, vegetables and used golf balls!

In Loving Memory of Catherine Blatherwick

We have received a total of £845 in memory of Catherine who passed away from a brain tumour.  Neal (her husband) writes that a grand total of £2,300 was received in her memory – which included proceeds of £500 from a samosa sale.  Treetops Hospice Care and Whiffle Pig also received donations.

Norfolk Family Walk
Sunday 7th October 2018
Over 350 adults and children plus numerous four legged friends converged on Holkham Hall yesterday for the Twelfth Norfolk Family Walk, organised by Astro Brain Tumour Fund, in aid of brain tumour research and support. The weather started off a little chilly but later the sun broke out and the walk was much enjoyed by all.

Many participants have been touched by brain tumours, including patients and families and friends and it is a lovely way to celebrate their lives. Around 2,000 miles were walked and this total will be added to the 2018 “World Walk” for Brain Tumours which is a project of the International Brain Tumour Alliance.

Eastnor Castle Mudrun
Sunday 7th October 2018
The Lerego team family consisting of Margaret, Alex, Olivia, Emily and Felix took part in this 6km family mudrun round Eastnor Castle raising money for Astro Brain Tumour Fund. Hannah Lerego was unable to take part in the run due to the fact she recently gave birth to a baby girl, Mia.  So she was chief organiser, supporter and reporter.   The Lerego Team raised £663, including Gift Aid for Astro Brain Tumour Fund.

ABTF Trustee Linda Rickford held a fundraising afternoon on 19th September 2018 which included cakes, tea, raffle competitions and sales of perfume, cosmetics, Candlelite products and Christmas cards.  With the help of many friends and family, a total in excess of £1,000 was raised for ABTF.

ABTF Trustees Mary and Robbie, together with supporters Val and Jackie, did a collection at Sainsbury’s, Hunstantonon 27th July 2018 and £295.40 was donated by the generous locals and holidaymakers.

ABTF Trustees Mary and Robbie, together with supporters Elspeth and Kenny did a collection at Tesco, Hunstanton on 7th September 2018 and amassed a total of £366.09.

” I was diagnosed with a brain tumour five months after our close friend Ali Smith.  I was fortunate (relatively speaking!) as my tumour was slow growing but our beautiful friend Ali’s was an aggressive brain tumour.  She fought bravely for 16 months but lost her fight in January 2017.

I found the race really hard but the fact that my daughter, Ella who was working at the event, amazingly was put on the finish line, handing out medals and Kate, Toni and Adrienne were there (waiting for me!) made the end so worth it”

Vanessa and her team raised the sum of around £2,000 (including Gift Aid) for Astro Brain Tumour Fund, which was half the money raised from this event (the other half going to Brain Tumour Research).

Mary & Robbie held a very enjoyable Cream Tea event in Holme-next-the-Sea Village Hall on 22nd August 2018. They sold out of scones but the cake just held on, some sat outside and enjoyed the sun. A raffle and a guessing game were also held and the total proceeds were £449 for Astro Brain Tumour Fund.

“We held a charity football tournament and raffle on 7th July to support four charities with our main cause being for Astro Brain Tumour Fund. We were supported by many businesses who provided raffle prizes and had five teams in the tournament. The day was a great success and we were able to raise a terrific amount for good causes”.  Mark and his team have donated £822 to Astro Brain Tumour Fund.

Mark Shepherd successfully completed this event on 9th June raising the sum of £962 (including Gift Aid) which will be divided between three charities, one of which is Astro Brain Tumour Fund.

Emily Leregro, whose husband has a grade 2 astrocytoma, reports:

“Mel and Caroline organise a charity nail art day every year in memory of Mel’s son Matt who died of a brain tumour as a teenager. They usually raise money for the Teenage Cancer Trust but this year, because of my husband, kindly said they would donate the money for Astro Brain Tumour Fund.  Lots of people supported the event – donating their time, cakes and raffle prizes”.  A total of £642 was raised on the day.

In Loving Memory of Chloe Smithson

Astro Brain Tumour Fund was chosen as one of the charities to receive donations from family and friends in memory of Chloe, who sadly passed away from a brain tumour. A total of £1,032.90 has been received by ABTF.

ABTF treasurer/trustee Mary Burton and helpers held a Cream Tea in Holme-next-the-Sea Village Hall in West Norfolk on Tuesday 3rd April 2018 from. A raffle was held and £250 was raised for Astro Brain Tumour Fund.

Trustee Linda Rickford held a bag packing day at Coulsdon Waitrose and with the help of a terrific team of helpers,  raised £1,060 for Astro Brain Tumour Fund.

Rod Barrett, proudly wearing his Astro running shirt, once more pounded the roads and lanes around the Royal Norfolk Showground and finished the run successfully still looking as fresh as a daisy at the end! All done in loving memory of Gemma Barrett.

91 people enjoyed an evening with tasty pies & puddings, a raffle with prizes mainly donated by the King William’s suppliers, gentle jazz by “All that Jazz” and great service from the staff.

Mary & Robbie held this event on 16th December 2017 in Holme-next-the-Sea Village Hall.  It was a great occasion with around 60 people enjoying their choice of homemade soup and puddings, rounded off with coffee or tea.   A raffle, tombola plus competitions to win a hamper and “guess the amount of jelly babies in a jar” were held.   After lunch a singalong of Christmas songs was enjoyed by all.

A total of around £645 was raised on the day, and, with an amount of £200 raised by sale of fruit, veg and nearly new golf balls in the last few months, a total of around £845 will be banked for Astro Brain Tumour Fund!

There was an impressive range of melodies beautifully played – we held a raffle and mince pies & coffee were served at the interval and £405 was raised fort Astro Brain Tumour Fund.

Over 350 adults, 86 children and 43 of their 4 legged friends walked over 1,900 miles at Holkham enjoying the beautiful scenery of the park. The weather was very kind although a stiff breeze threatened to blow away the events tent once or twice!

They walked one, three, six or ten miles – the one mile walk had games for the children at the half way mark and the ten mile walk took in Wells-next-the-Sea.  The majority of walkers had family or friends whose lives have been affected by brain tumours and come back year after year to show their support.

To view images from the day, please go to our Facebook page

Costas Eleftheriades took part in the Great North Run on 10th September in memory of his son Tom, who passed away from a brain tumour in 2009.  He supported Astro Brain Tumour Fund and Nasio Trust and raised a total of £543.

An exhibition was held in Holme-next-the-Sea Village Hall on 23rd September 2017. Sally and Martin Crown collected photos, documents, maps and all matters relating to the history of the village with the help of contributions from Holme villagers, past and present.

We have received the following recently –  £95.68 being proceeds of sales on eBay, £35 from Linda Rickford for selling an item on Gumtree, £221 from Robbie Burton for sales of veg and used golf balls!

Social Knitworks had a stand at Folkeast Festival on the weekend of 23rd August 2017 and raised £337.24 for Astro Brian Tumour Fund.

Dave Connett shaved his beard off in loving memory of Becky Clarke and raised £481 (including Gift Aid) for Astro Brain Tumour Fund.

Christine, Trevor, Val, Jackie, Robbie and Mary did a bucket collection at Tesco, Hunstanton on 15th July and the proceeds amounted to £397.23.

We have received a cheque for £2,425.60 from Wendy Quilter raised during her year as Lady Captain of the club.  They held many events during the year including “Guess the Longest Drive Competition”, Afternoon Queens Tea celebrating the Queens 90th birthday, a sweepstake for the Grand National, a seaside themed event day, a couple of charity golf days and a Murder Mystery Night (which was held before the American vote) called “Who Killed Donald Trump?”!

A Fashion Night organised by Allez Chic was held at the Bank House, King’s Lynn on 6th April 2017. Around 80 ladies enjoyed a two course meal while watching the fashion show. Around £645 was raised, including raffle proceeds, for Astro Brain Tumour Fund.

Cream Teas were served in Holme-next-the Sea Village Hall on 12th April. A raffle was also held and a total of £350 was raised for Astro Brain Tumour Fund.

A bucket collection was held at Sainsbury’s, Hunstanton, Norfolk on 7th April and £318.16 was raised for Astro Brain Tumour Fund. The buckets were manned by Trustees Mary and Robbie Burton and by volunteers Val Minns and Jackie Arnold.

City of Norwich Half Marathon

Rod Barrett once again successfully completed this race on 9th April 2017 proudly wearing his Astro shirt, with the memory of his niece Gemma Barrett spurring him on. It was an unseasonably warm day but he still looked his cool, calm and collected self at the end!

A pie, mash & puds night was held at the King William IV Country Inn & Restaurant, Sedgeford, Norfolk, on Wednesday 8th February when a great night was had by all the 78 people who attended.

The game, steak & kidney and fish pies were all praised highly and the “All that Jazz” trio added their music to help create the relaxed and friendly atmosphere enjoyed by all who attended.  Most of the 42 raffle prizes were kindly donated by suppliers to the King William or our regular supporters.