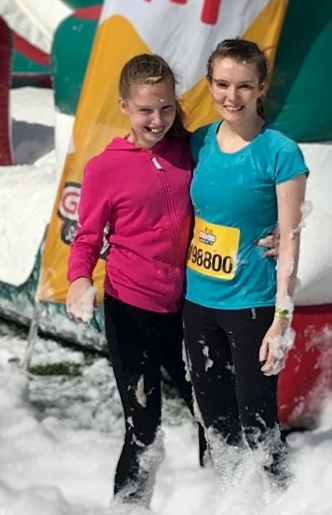 “My name is Samantha Bruce. In January 2018 at the age of 28 I was diagnosed with a Grade II Astrocytoma, measuring 10 by 4cm in my left frontal lobe. This came as a huge shock to my family, friends and myself. I had just moved in with my boyfriend and graduated as a Mental Health Counsellor two months before. I was looking forward to my new beginning but instead, I had to have 2 brain surgeries and an aggressive course of radiotherapy. I suffered severe seizures for a year after and I was in and out of hospital.

I found my diagnosis very difficult to come to terms with and I don’t think I’ll ever fully accept it. Watching what my family and friends were going through as a result was the hardest part of it. While I was ill, I made a goal to participate in an event when I felt well enough to do so.

In September 2019 myself and 5 friends signed up to GUNG-HO 5K to raise money for Astro Brain Tumour Fund. We had such fun on the inflatables during the course and we raised £528 in sponsor money! It was great to smile again and do something “normal”. I was so proud that I achieved my goal! J
I have found that turning my negative energy into something positive has helped me to carry on, while helping to raise money for vital research.